In the Dresden Series created for this exhibition at the Lowe Art Museum, Sebastian Spreng moves away from the lyrical paintings of the past that were inspired by the ethereal beauty of nature to a subject of serious historical import.  The Allied bombing of one of Europe’s most culturally significant and beautiful Baroque cities in February 1945 is a dark chapter in the story of war, and one that would be repeated in many horrific ways to this day.  To capture the essence of its tragedies, Spreng explores new media and new technologies to produce 60 digital prints created on his IPAD directly on aluminum.  Using photographs and computer manipulation of line and color that appear like ghostly shadows to scar painterly surfaces, Spreng turns to his lifelong love of music and poetry to inspire the many moods of war – from dark destruction to rays of light.  Each work is named a Canto, a reference to divisions in poetry and music derived from the Latin for song, and for him inspired by Dante’s Divine Comedy and his cantos about purgatory.  It is a perfect way for the artist to present the works as verses, approaching the series through mood.  They are also odes to remembrance and hope for the future. 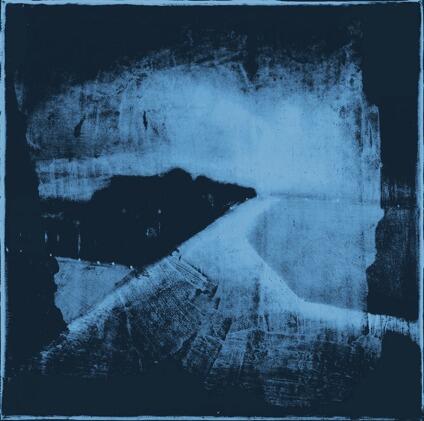 The exhibition is divided into 2 parts: images based on historical photographs and metaphorical works that are more abstract and poetic interpretations of the war-torn city.  Canto VI: Dresden is one of the most dramatic images.  The ruins of the city emerge out of the golden ashes of war, still glowing and striking fear.  The surface of the plate has been eroded and distressed, as have the city’s walls and buildings, reduced to barely recognizable skeletons.  With his IPAD, Spreng has succeeded in capturing a scene of devastation that can be any city in any war, while maintaining a painterly aesthetic that is typical of his earlier works.  Canto XXVIII, Verse III is printed in a glorious blue, a reference to the view from above of pilots who see through the dark shapes of clouds to the outlines of the city below.  The black clouds interfere with the true reality beneath them.  Canto XXXV: Dresden Flowers auspiciously appears toward the end of the series; a lone stem emerges from the ashes like the proverbial phoenix rising to bring new life and a single ray of hope.  For Sebastian Spreng, the war story of Dresden has haunted him for decades, and this is his “hymn to what was lost and my humble supplication to mankind to never lose sight of the real cost of war.”